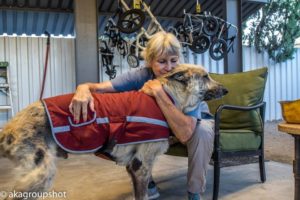 In 2012 Trisha Houlihan, a volunteer at the local county animal control shelter, was saddened by the volume of German Shepherd Dogs (GSDs) being listed for euthanasia. She recognized there were very little resources for the rescue of this breed, so she created a place for them – Saving Paws Rescue Arizona (SPR), a place that would be a safe harbor for German Shepherd and Belgian Malinois Dogs.

On January 31, 2013 Saving Paws Rescue, located in Phoenix, Arizona (Maricopa County), received an email plea claiming a number of German Shepherds were in immediate need of help. The location was in La Paz County in the middle of the desert, on 300+ acres. The breeder supposedly had been evicted off the property and the living conditions of the GSD’s was deplorable. SPR ended up rescuing 26 German Shepherds.

Trish contacted the animal control officer in Parker, Arizona and got more information. After hearing that the dogs were without food or water, SPR gathered up food and supplies along with crates, and within an hour they were on the road to an area in the middle of nowhere, not knowing what to expect. The property appeared to be a dump site of garbage, old cars, RVs, and trailers. In the middle of the property was an old 2 story shack. They knew it was the right place by the large pack of German Shepherds that were running loose everywhere.

The breeder, Carl Hefley, said he had been doing this for years and at onetime admitted to having as many as 60 dogs on the property. Some had been sold but many had died due to lack of food, water and medical treatment. He was letting them fend for themselves, as witnessed by us. “Dayka” now with us in rescue was eating a dead cow leg, probably the only food she’d had in weeks. All were filthy and smelled like dead flesh. Many of the dogs were suffering from diarrhea, severe ear infections, parasites, dehydration, malnutrition and genetic medical conditions. 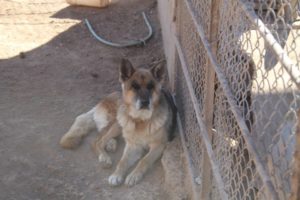 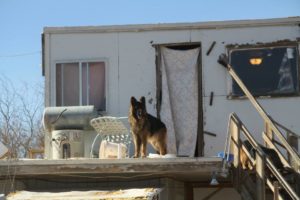 Some of the dogs had claimed the abandoned RV and old trailers for shelter. Other dogs were chained with no food or water and had to crawl under the trailer to escape the heat. We cringed to think of what it must have been like in the summer heat. Three dogs that were penned had dug very deep holes in the ground to escape the heat, sun and cold desert nights.

Carl Hefley admitted that none of his dogs had been altered. Fighting and inbreeding was going on. Several male dogs had new bloody lacerations and many had old scars. The problem perpetuates as the breeding season approaches.

We were shown a very young puppy whose mother was locked in the lower level of the shack. Carl refused to allow us to take her and her 6 puppies. The breeder was only willing to surrender to us the sick and elderly dogs that had been neglected for years! We knew we were facing a huge expense. Every dog was underweight and many were emaciated to the point of being only half their normal body weight. Two dogs were unable to walk and others struggled to.

We learned that La Paz Animal Control had been on the property and removed 6 dogs. We were able to convince Carl it would be best if we could as many as we could during our visit, knowing he would leave the sick and dying behind when he vacated the property. Our transport space was limited, since we brought 10 bags of dog food. Our primary concern was making sure the dogs had something to eat. With his consent we loaded up 3 dogs and said we would return for the remaining. We then traveled on to Parker and picked up 5 more from them to free up much needed kennel space from their small shelter. We heard from animal control “once we get them, what do we do with them?” All the while we were communicating to reassure them that we would take all.

Four trips to Carl’s property and Parker County Animal Shelter, SPR managed to get a total of 26 GSDs. All of the urgent (sick or injured) dogs were taken to veterinarians for immediate treatment. Four were facing major surgeries from long neglect. The remaining dogs were seen by area veterinarians so that they can receive fecal and blood tests, x-rays, neutering/ spaying, micro chipping, vaccinations and grooming. All the medically stable dogs went to foster homes or a private boarding kennel. Saving Paws Rescue had hoped to get the remaining dogs off the property completely by the weekend. Sadly, Carl has left to an unknown location with 5 young adult dogs and the litter of puppies. One dog was found dead at the edge of the property line. Trish asked several of the local authorities for help in finding the dogs before they also become sick, or neglected, and left to die. To date little to no help has been given by the authorities. The breeder walked away with no charges. 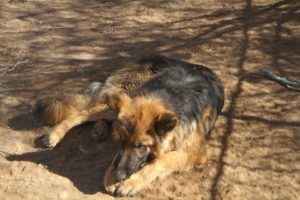 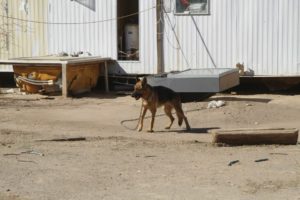 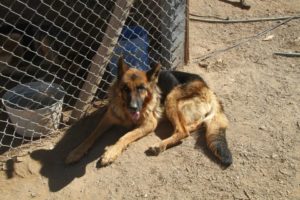 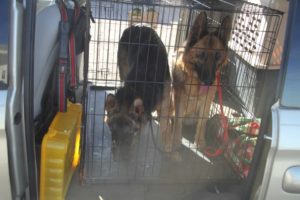 What started out as a small group of volunteers using foster homes and boarding facilities has grown into a rescue saving more than 200 dogs every year. Unfortunately, the demand for homes for abandoned dogs continues. Saving Paws Rescue Arizona operates through private donations and charitable grants received to help these special dogs. Saving Paws Rescue Arizona is a 100% volunteer run organization. Their dedication helps make it all possible. They foster dogs, care for dogs, transport dogs, perform administrative tasks and give freely of their skills and talents. Saving Paws Rescue Arizona does not believe that behavioral, medical or age are should be an automatic death sentence and will often take those that others will not.

Volunteers are the key to our success and we need you to help us in our mission to promote the rescue, adoption and well-being of our dogs. We are dedicated to saving the lives of those that others won’t. We help the sick, old, and those that have run out of options. We’re certain that we will have a volunteer area that works great for you and your schedule. Visit our volunteer page to learn more.